Terry Bonchaka and Ebony Reigns, two late popular musicians, are remembered in one of the verses of Jay Bahd’s tribute song to American celebrity fashion designer, Virgil Abloh, who died on November 28th, 2021.

Terry Bonchaka was a Ghanaian Hip-Life Dancehall musician with a unique way of singing and a unique way of drawing crowds on stage with his own fabricated dance style, one of which was to lift one leg jumping forward while dancing, until his unfortunate demise in a car accident that  occurred on October 29, 2003, at  the Tetteh Quarshie Interchange, soon after he began receiving media attention.

Ebony Reigns was a young beautiful thick lady with a unique stage craft that many criticised until her death, which sadly occurred.

Ebony Reigns was also a young beautiful thick lady with a unique stage craft with her own way of dressing that many had criticised her of her her outfit on stage. Sadly in 2018 death came to turn bashing into sympathy when she was involved in a car accident in which her friend and an army officer also died.

The two artistes we yougsters with Terry Bonchaka at the age of 21 and Ebony 19 years of age. 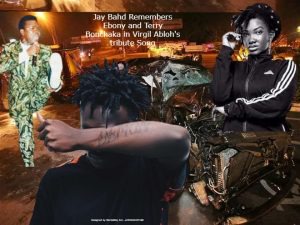 The Hatmanhttp://Zackgh.com
Zack popularly known as The Hatman, is a song writer, blogger, teacher and a business man. Zack is the CEO of Wordswar Technology & Investment, and the owner of Ghanalegendary.com and has passion for blogging just about every interesting topic. Get in touch with the number one Ghanaian promoter on +233244047835 or +233246187160
Previous articleArsenal fc extend contract with manager Mikel Arteta
Next articleNzema Kotoko Part ways with coach Seth Hoffman