Ghanaian Afrobeat-Reggae-Dancehall music composer based in the United Kingdom, has given 1000 Ghana to a Twitter follower who shared a video of him hilariously dancing to Feli Nuna’s latest song, “Towel”.

Nana Richard Abiona, better known by his stage name Fuse ODG, is a British-Ghanaian singer and rapper who decided to challenge his fans to share an interesting video of themselves in a towel while vibing to Feli Nuna’s new song “Towel” and win 1000 Ghana cedis out of the 10,000 Ghana cedis he is giving away, check out his post below: 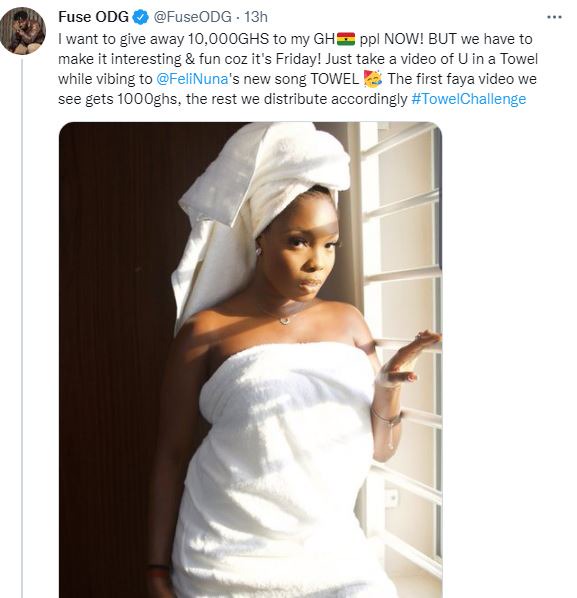 “I want to give away 10,000GHS to my GHppl NOW! BUT we have to make it interesting & fun coz it’s Friday! Just take a video of U in a Towel while vibing to @FeliNuna‘s new song TOWELThe first faya video we see gets 1000ghs, the rest we distribute accordingly #TowelChallenge“.

A twitter user named “Mr Man” won the Ghc1000 prize after sharing a video of himself dancing, which elicited laughter emojis in the comment section below ODG’s giveaway post; watch the video below:

After being bashed by some netizens claiming he used his wife’s towel to shoot the video, shared a snapshot to cofirm he has been sent the 1000 by rapper Fuse ODG. check it out below: 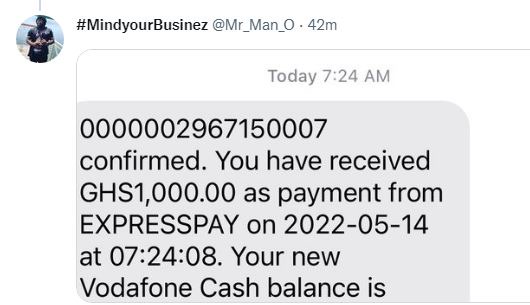 The Hatmanhttp://Zackgh.com
Zack popularly known as The Hatman, is a song writer, blogger, teacher and a business man. Zack is the CEO of Wordswar Technology & Investment, and the owner of Ghanalegendary.com and has passion for blogging just about every interesting topic. Get in touch with the number one Ghanaian promoter on +233244047835 or +233246187160
Previous articleChelsea on the verge of signing Perisic from Inter
Next articleKassim Mingle Claims NASCO Coach Of the month- March