Addi Self details deep secret with Shatta Wale, Captan and the issue that led to his suspension from Shatta Movement

Addi Self details deep secret with Shatta Wale, Captan and the issue that led to his suspension from Shatta Movement

Ghanaian musician and Self Nation boss, Addi Self, has revealed some serious issues he had with his former boss, Shatta Wale, while in his former camp, Shatta Movement. 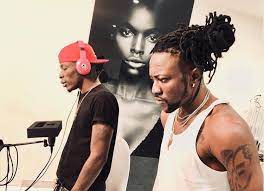 Addi Self was a strong pillar of the disbanded Ghanaian music group, SM Militants, a sub-group of Shatta Movement Family founded by Shatta Wale known as SM or SM4Lyf, which included Addi Self, Captan, Joint 77 and Natty Lee.

They released several songs as SM Militants, including hit songs such as Taking Over and Forgetti, and have also appeared on Shatta Wale’s songs such as Control Ghana, True Believer, and others.

However, he has since left the group due to some issues with Shatta Wale, with numerous rumours circulating on social media and other media platforms as to why he left.

But on Sammy Flex he had so many things to say which you can watch the video below to listen to what he had to say about Shatta Movement Militant, Shatta Wale and why he left:

Addi Self details deep secret with Shatta Wale, Captan and the issue that lead to his suspension from Shatta Movement

Thank you for reading this post, don't forget to subscribe! If you have any music, content or products or services you wish to advertise on ZackGh.com or ZackNation then get in touch with us on this number +233246722883 or +233246187160 or you can use the WhatsApp button below.

NOTE: Please take note that the above numbers are currently our official numbers, so please don't contact any other number other than the numbers above, Thank You.

We are also into social media handling, if you have a social media page that you cannot handle it yourself or you need more followers, likes, views for your handle, page or YouTube Watch Hours, subcribers, or views; If you need someone to do that for you just get in touch.

The Hatmanhttp://Zackgh.com
Zack popularly known as The Hatman, is a song writer, blogger, teacher and a business man. Zack is the CEO of Wordswar Technology & Investment, and the owner of Ghanalegendary.com and has passion for blogging just about every interesting topic. Get in touch with the number one Ghanaian promoter on +233244047835 or +233246187160
Previous articleLegendary Nana Ampadu’s Family Announces Funeral Date
Next article“I’m not going to pay you in kind but in cash” Shatta Wale woos Michy another collabo

I don’t actually know for a fact somebody went in my pocket! - Meek Mill wants 'suspect' released Meek Mill, an American rapper, has changed...
Read more

This Year by Zack Gh Produced by Apya Ghanaian rapper and singer from the Kumawood, Abdul Razak Amissah known by his stage name as Zack...
Read more