Did Muhammad Ali build 170 Mosque in USA during His lifetime?.

Yes, Indeed Muhammad Ali often popularized as Legend Ali or ‘The Greatest” was an American Wrestling Boxer who was a converted Muslim and Regarded in the Muslim world as one of the most humble Public figures ever during his lifetime. 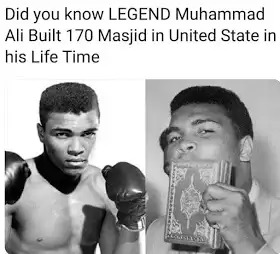 Muhammad Ali’s Imaan (Faith) was so high that once a reporter asked him ‘Do you have Bodyguards with you”? Ali replied ‘I don’t need a bodyguard Allah is my Bodyguard”.

Recently a picture of Muhammad Ali is getting Viral on the internet and other social media platforms with a quotation above the picture that ” Did You Know? The Legend Muhammad Ali built 170 Masjids/Mosques in the United Nation in his lifetime.

But, Indeed an Airport in the United States of America changed its name to Muhammad Ali Airport in Louisville, and we also posted that news on our websitete, you can check further by going to the home page.

People often from the perspective of their gratitude and devotion spread this news on Media, we respect their sentiments but it is also not acceptable to spread false news without any proper evidence to claim the news.

We request you All, if you know anything about this news please kindly tell us in the comment section and also provide us proof which can signify the news importance.

However, Muhammad Ali was a Muslim and died a Muslim that’s what we know and may Allah be pleased with Him.and grant him Jannatul Firdaus.

Why did many famous people converted Islam, you click the link below to learn briefly about the religion.

The Hatmanhttp://Zackgh.com
Zack popularly known as The Hatman, is a song writer, blogger, teacher and a business man. Zack is the CEO of Wordswar Technology & Investment, and the owner of Ghanalegendary.com and has passion for blogging just about every interesting topic. Get in touch with the number one Ghanaian promoter on +233244047835 or +233246187160
Previous articlePresident Kwame Nkrumah overthrown in a Coup
Next articleDocia Kisseih -first Ghanaian Chief Nursing Officer

Black Sherif showered on stage while performing at the 5th edition of the 3Music Awards (Watch Video) Black Sherif wowed the audience with an epic...
Read more
Biography

Do science and the Qur’an say the same thing about history of the universe and creation?

Do science and the Qur'an say the same thing about history of the universe and creation? The video below includes the late renowned Islamic scholar,...
Read more