The Ghana premier League side Legon Cities has officially confirmed the signing of the Ghanaian and former Suntherland player Asamoah Gyan.

The Ghanaian striker who is now an official player for the Legon cities is expected to wear his number 3 Jersy.

Asamoah Gyan who was in the early hours on Sunday comfirmed officially on Twitter by Legon Cities is to earn $1million dollars as wages and other incentives.

The deadline for the Ghana premier League transfer ended on Saturday the 31 October, 2020.

Asamoah Gyan is expected to compete with top clubs in the Ghana premier League.

However, Asamoah Gyan who just ended playing for an india side North East is back to play for Legon Cities after his transfer deal failed with Kotoko but a successful transfer deal went through with Legon Cities.

Asamoah Gyan’s Manager, however could not confirm to Joy Sports if Matthew Anim Cudjoe will join Legon Cities and if the club can afford to pay for his services.

He, however, said the former Asante Kotoko player may join the Royals due to higher demands from abroad he added. 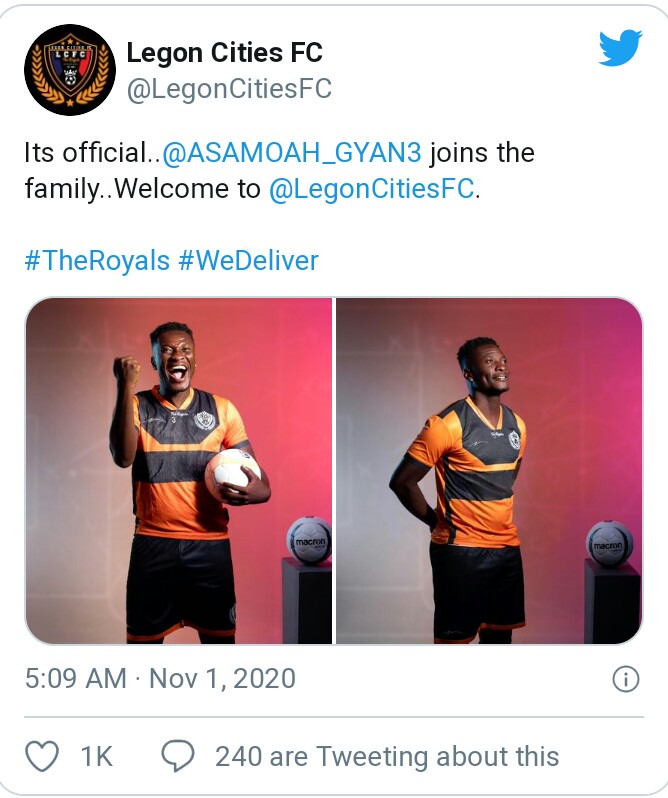 Edrine Yeboahhttp://Zackgh.com
I'm Edrine, popularly known as Edrino Greatness, a Ghanaian sensational blogger with so much passion for blogging. I'm a Team player and can work under any circumstances. I believe in possibilities and can do spirit. You can get in touch with me by contacting me on +233570405064 or Send me a messsage on WhatsApp. @Zackgh.com we publish Articles and also help promote upcoming and mainstream Artistes to upload their songs as well on our page. I leave you with my favorite quote "Every dream is possible and there is nothing one cannot do if you put your mind to it".
Previous articleYaa Pono – Hotspot ft Nana Nketia (Prod By Dr Ray Beat)
Next articleYaa Pono – Thug Diaries [Drago] EP (Full Album)

BREAKING News: Jose Mourinho has been sacked by Tottenham Hotspurs.

Tottenham have sacked Jose Mourinho with the club on course to miss out on Champions League football this season. Mourinho, 58, replaced Mauricio Pochettino in...
Read more
Sports News

It will be the first time Chelsea FC and Leicester City meet at this stage of the competition. The Foxes won 1-0 against Southampton in...
Read more
Sports News